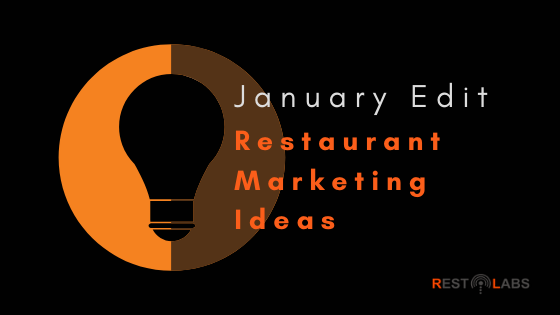 Posted on
in
Restaurant Marketing

In the restaurant industry, January can be a complicated month as, statistically, it’s the slowest month of the year. The time between Thanksgiving and New Years, with the big holiday of Christmas in between, restaurants generally enjoy a lucrative phase.

But soon after, several reasons tend to keep customers at bay. First of all, following the big-spending during the holiday season, people tend to be much more frugal. They’re also emotionally exhausted after all the holiday activities. Secondly, people are more likely to dine in as winter is at its peak in January and temperature starts dropping further.

What this means for restaurants is that, as soon as the new year dawns, they need to amp up their marketing campaigns. Even though owners and employees, both, are likely to feel drained from the busy and stressful holiday season, you cannot relax just as yet. In fact, you need to work doubly harder to increase business during this slow month.

Here are some marketing ideas to make sure you’re on top of your game this January.

One of the biggest factors resulting in slim restaurant footfall in January is simply the customers’ choice to dine within the warm comforts of their home rather than battle the piercing cold outside.

With advanced technologies and changing lifestyles, food delivery has already changed the business, but come winter season, restaurants need to double down on delivery if they want to perk up sales.

Besides setting up an efficient online ordering service, a large chunk of your marketing campaign should be dedicated to promoting delivery. Provide extra incentives for people ordering online, like discounts, combo deals, coupons, etc. Sending personalized deals to each customer will definitely bring in added sales.

This gives restaurants a perfect reason to whip up a fun marketing campaign based on some of these events.

For instance, you can create conversations on Twitter about people’s favorite cheese on National Cheese Lovers Day or ask people what movie they’d fancy watching while curled up on the couch with popcorn on National Popcorn Day.

A few years ago, Wendy’s Twitter account went viral with their savage roasts of followers and competitors and cheeky comebacks. Taking the burger chain’s cue, remember that on Twitter it helps to be witty, playful and at times, even tongue-in-cheek.

If common fable is to be believed, people gain about five pounds from the time they take that first bite of turkey stuffing on Thanksgiving to the last bite of that Christmas pudding and the endless glasses of wine through New Year’s Day.

We’ve all heard of the notorious ‘holiday weight’ and post the unbridled eating phase, restaurants can tap into this guilt by encouraging healthy eating during the month of January.

You can either add limited healthy specials on the menu and promote it across all mediums or you can share healthy recipes and fitness tips on your blogs and social media feed.

Show that you have a heart

Since 1970, the United States has celebrated January as National Blood Donor Month, inspiring people to quite literally roll up their sleeves and donate blood and platelets.

According to the American Red Cross, someone in the country needs blood every two seconds and one person’s donation can save up to three lives. Studies have shown that customers appreciate and are more loyal to brands that incorporate philanthropy. This shows that you’re not only racing after profits but also care for the community.

During the whole of January, your restaurant can create a campaign around blood donation. You can also share photos of your restaurant employees donating blood on your social media pages. The audience will truly appreciate your efforts.

At the end of the year, people are highly motivated to break their old bad habits or pick up new and better ones as they create a list of resolutions from the coming year. However, according to research, most of these resolutions fall flat even before the end of January.

You can design an engaging campaign to remind your customers of their New Year’s resolution and spur them on to keep them intact. You can pick your own personal resolution as a restaurant and show how you’re making sure you’re not relinquishing it.

For example, your restaurant’s resolution could be extra discounts, a quicker turnaround for customer queries, more special menus, etc. and you could create images and video content around it to share with your social media followers or send well-designed email newsletters.

Tap in on nostalgia

With the holiday season over, restaurants can play on the customers’ emotions with some smart nostalgia marketing. A study published in the Harvard Business Review revealed that when people experience nostalgia, they feel more connected to a brand, while also reducing their desire for money, which basically means that customers are ready to pay any price for something that takes them down memory lane.

Several brands have already done this successfully—through a series of retro vignettes and a dash of traditional Americana, Chili’s narrated their origin story, KFC roped in actor George Hamilton to play the Extra Crispy Colonel in order to promote the chain’s Extra Crispy chicken, for a limited run-time in 2016, Pepsi brought back a discontinued drink from the 90s called ‘Crystal Pepsi’.

You don’t have to go that far back and can simply make your customers relieve their holidays with something like a ’Tis the Season of Nostalgia campaign. People can share their best memories and pictures from the last holiday as user-generated content or you can even add a holiday dish or two to your menu to continue with the spirit of celebration.

Be on top of your hashtag game

Hashtags have become an integral part of any digital media marketing campaign, especially for visibility when tons of content are being produced and promoted on social media every single minute.

With the right hashtag, you can help target a highly specific audience, allow users to locate your content, increase brand awareness and create greater visibility for a campaign. You need to do some thorough research about what hashtags to use and also spend some time creating your own.

For January, hashtags could be tailored to specific events during the month like #BloodyMaryDay, #BeKindToFoodServersMonth or something general but popular like #JanuaryBlues #JanuaryDetox, #JanuaryBirthday, etc.

As soon as January hits, the trick is to not slow down despite all the exhaustion of the holiday season. Planning ahead will certainly pay off in the long run. To sum it up the biggest thrust should be on promoting online food delivery service as most customers are going to prefer dining in as opposed to braving the cold and heading out. January also offers restaurants plenty of occasions to come up with exciting social media campaigns that are sure to be engaging if done the right way.

3 big benefits of online ordering for your catering business

Restaurant Guide: The rising trend of health food businesses and how you can be a part of it

Jul 9, 2022
in
Consumer Trends
View All Posts
Restolabs
A powerful and simple online ordering system for food establishments to sell directly to their customers via their website. It doesn’t get any better than that!